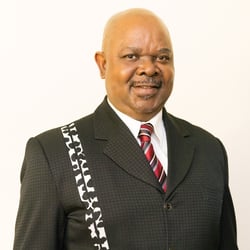 Muraina “Morris” Akinfolarin has been a passionate and powerful advocate for the African community in Rhode Island for more than 30 years. His goal: to create opportunity and enrich lives within the largely immigrant community. Here’s why he’s now added Alzheimer’s education to that mission…

A Long History of Service and Advocacy

He and others founded the organization more than 30 years ago as a way to develop opportunities for themselves as recent immigrants and to create continued opportunity for others in their communities for generations to come. Though he’s also worked a full time job as a Resident Engineer for Rhode Island’s Department of Transportation throughout that time as well, Oasis International quickly became his passion and his calling.

“It’s been a wonderful journey,” he says. “We started in 1990 and didn’t know then how it would turn out. But it’s become a real center for the African American community in Rhode Island, and I’m proud of the work we’ve done to promote culture, community, economic empowerment, and youth leadership development. In those areas we have achieved a lot. Our programs have helped to create doctors, engineers, and architects in our youth. That by itself has brought blessings to our community."

Health and wellness is another important focus of the organization, and one that has grown in recent years. When it comes to Alzheimer’s, African Americans are twice as likely as whites to develop the disease and yet they are underrepresented in research studies.

That’s why Akinfolarin is working hard to educate the community about Alzheimer’s, and to dispel harmful myths about the disease that have been culturally engrained for generations. It’s a mission that’s born from personal experience.

“Before I moved to the U.S., a couple of my aunts had Alzheimer’s,” Akinfolarin says. “In the African community, there’s a belief that people with this condition are not sick, they are possessed, they are a witch. I stayed with one of my aunts in her house to care for her and show them that is not the case. I educated my family that she is not going to hurt you, she is not a witch, she just has a medical issue and she needs help.”

“As an immigrant, we know we still lack this education in our communities here in the U.S. Many people still don’t understand what it is and are running away from their loved ones instead of helping them, not knowing. So we are trying to educate them that it is a disease, and these are innocent people that need help.”

To aid in that effort, Akinfolarin joined the Community Advisory Board at the Memory and Aging Program at Butler Hospital.

The board brings together individuals from diverse and under-represented communities across the state to help provide greater Alzheimer’s education and resources to those communities.

“It’s been an excellent experience for me, to meet people in research, hospitals, [Brown] University, and community leaders, all working on the same thing. We get to share ideas and brainstorm how to continue and improve on what we’re doing,” Akinfolarin says.

“Our elders need help. Here in the U.S. we have large populations who don’t really understand what it means to have Alzheimer’s or dementia. And so part of our mission is to re-educate the community so they can take that back to their own households here, and to family in their home country. That has been very helpful for us to be the torch bearer of that message in our communities.”

Akinfolarin says educating about Alzheimer’s and overcoming health inequities requires a joint effort, both within the African American community and outside of it as well.

“The more we do outreach within the community, the better outcome we’ll have. And that means educating not just the old but also the young. This is important for our youth to learn about, too – their education needs to be carried along throughout life, not just waiting until they get older.”

“We need to get the politicians involved as well. That’s very important because they hold a lot of keys that we don’t have. There’s been a lot of support so far, but we need it to continue and there has to be a voice from them to support health equity and funding for research.”

“We need to integrate this education into all the foundational institutions – government, schools, faith based. We’ve got a lot of work to do.”