The Other Great BIPOC Oppressor That Needs Attention Now

This year we celebrate the 40th anniversary of the inspirational American civil rights trailblazer, Dr. Martin Luther King Jr. As we remember him, let’s not only be reminded of the daring doctor’s fight against racism but rather, let us also reflect upon how this great martyr’s activism can be applied to another oppressor.

An oppressor who is faceless, but whose name is infamous. An oppressor who does not discriminate but affects minorities at a higher rate. In fact, African Americans and Hispanic individuals are projected to make up nearly 40% of the 8.4 million Americans expected to be plagued by this enemy by 2030.

So, who is this antagonist?  It is an awful disease by the name of Alzheimer’s.

Dr. King is remembered for many quotes, most notably his “I Have a Dream” speech. However, it was what he said over 55 years ago to the Medical Committee for Human Rights (MCHR) that still echoes true today:

Of all the forms of inequality, injustice in health is the most shocking and inhuman.” – Rev. Dr. Martin Luther King, Jr.

African Americans represent approximately 14% of the US population, yet account for less than 5% of all clinical research trials**. To rectify this, we must focus on access, equity, cultural sensitivity, and diversified recruiting strategies.  This idea of inclusivity is essential if we are to find a cure for AD.

How many times have you walked through a drugstore and noticed all the different medicines on display? How do we know that those drugs are effective for everyone who buys them? All the medications on those shelves – every one of them, has gone through a clinical trial to test its efficacy. The more diversity in trials, the better they can determine how well a drug or treatment works across different groups and populations.

Representation in clinical trials is critical to ensure everyone can reap the health benefits these studies have to offer.

In his 1963 Letter From a Birmingham Jail, the incarcerated Dr. King penned an open letter and stated  "Freedom is never voluntarily given by the oppressor; it must be demanded by the oppressed." By definition, oppression is "a feeling of being weighed down in mind or body." Continuing to view Alzheimer’s through the lens of MLK’s excerpts, one can easily see how those suffering from the most common form of dementia are, in fact, experiencing oppression;  weighing them down by way of bewilderment, memory loss, and deteriorating abilities.

Dr. King said the oppressed must demand freedom. In this case, the 'oppressed' cannot advocate for themselves and 'freedom' from Alzheimer's cannot be had as there is no current cure – yet. However, freedom in a different form may be attainable.

The medical field must fully embrace equity if we’re going to turn the tide against the kind of injustice in healthcare that Dr. King spoke of in 1966.  Dr. King understood the stakes are life and death.  Butler’s Memory and Aging Program recognizes the historical lack of equity, diversity, and inclusion in research.

Here are four steps MAP is taking that speak to this improvement:

Effective treatment, prevention, and maybe even ‘freedom’ of Alzheimer's is closer than ever before.  We're at the forefront of that effort right here in Rhode Island. But we can't get there without the help of thousands of people with normal memory or mild memory loss who are willing to participate in research.

Butler’s Alzheimer's Prevention Registry allows us to match people interested in participating in research, with studies for which they may qualify. You can join online now. However, joining does not mean you are required to participate in any study.  We will notify you when a study becomes available and discuss the details to see if it may be a good match for you.

Will you join the registry right now and help advance the fight against Alzheimer's Disease with us? To get started, click the button below or call the MAP Outreach Team at 401-455-6402 for more information and assistance. 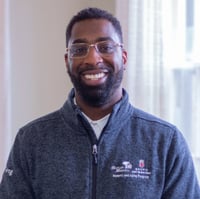 About Gregory Brunson, Jr.
Gregory is a Diversity Outreach Coordinator for the Memory and Aging Program. He received his bachelor’s degree from The University of Rhode Island in Communication Studies and has acquired a Diversity and Inclusion certificate from both Cornell and the Greater Boston Chamber of Commerce. Gregory has over 10 years of experience in Business Development.