Former Addiction Counselor, Recovering Addict: This is The Key to Sobriety 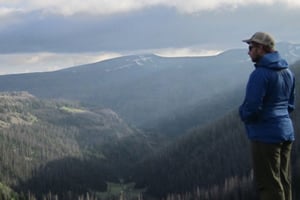 "If my life was a script, I would never have thought it would have taken a turn in that direction."

So says Michael, a former patient of the Alcohol and Drug Addictions Inpatient Unit at Butler Hospital, when thinking about how he came to be an addict in his early twenties. Now ten years sober, he could apply the same observation to how far his life’s script has flipped back in the other direction.

Today Michael is a husband, a father to three small children, and a college student pursuing a degree in biomechanical engineering. In the ten years since he fought the battle over his addiction, he’s also worked as a chef and as a Licensed Alcohol and Drug Counselor (LADC).

Although he’s taking his career in a different direction now, he continues his work to help others afflicted by addiction by acting as a mentor to others in recovery and by sharing his own story of struggle and success over addiction at public speaking engagements.

In the midst of the coronavirus pandemic, public speaking engagements aren’t currently possible. So instead, he’s sharing his story and his insights here online.

Here, in his own words, Michael shares the story of how he’s achieved sobriety, and what he wants everyone to understand about addiction…

“The public opinion on alcoholism and addiction I think is starting to shift, but people look at someone suffering from addiction and still think of the dregs of society – someone on skid row, or some homeless guy. But that wasn’t me.”

I grew up in a family where we were well off enough. My father worked in law enforcement and my mother was a teacher. They were the most loving, kind people you could want. I’m even an eagle scout, and am quite accomplished in life outside of the portion where I was addicted.

In my situation, addiction came about as the result of a series of bad coincidences followed by bad choices.

A little before I was due to start college, my mom died. Around that same time, I had had a surgery and was given prescription pain pills during my recovery. That’s where it all started for me.

Abusing the pills started as just partying here and there but when I lost my mom it quickly became a coping mechanism. After a while it progressed to the physical side of addiction, where even if you realize what’s happened and you want to stop and you try to stop, you just can’t.

I was living in Florida at the time, and moved up to Rhode Island to attend Johnson & Wales University. I’d been working in the restaurant industry and wanted to become a chef. When I moved here and started school was my first time trying to quit. I was successful for a while, but eventually it just became too much of a temptation. I began drinking a lot, then picked up the pills again, and that was that.

I went through a few years of living like that. Just day to day, living the monotony of just always being messed up. I was stealing things to support my addiction and I was definitely not the most dependable person in the world. I really don’t think people choose to do the things they do when they’re in the midst of addiction. It all just becomes a survival mechanism.

After a few years like that, I was lucky enough to meet my birth mother, who lives in East Bridgewater, Massachusetts. She has her own experiences with overcoming addiction, and she watched me go into this downward spiral. My dad was still down in Florida and the rest of my family is all spread out, so she was the closest to me at the time. One day she showed up at my front door and said, ‘Go get help or we have to part ways.’

And that’s how I ended up at Butler. My dad came up from Florida to take me, and I’ll never forget it.

It was the night of the Olympic hockey game and I love hockey, so it was kind of synchronistic in a way. Growing up I played hockey and my dad was my coach. So there we are, my dad and I sitting in this hospital waiting room instead of watching the hockey game, both of us wondering how we had gotten to this point.

I had caused so much pain to my family that he was already at the point of considering if it was time for me to just stay away. Six years later he was the best man at my wedding. But getting to that point wasn’t without a lot of work.

The first few days of my inpatient treatment are kid of a haze, but I do remember feeling like I was safe and taken care of. I remember somebody said something to me like, ‘You don’t have to feel this way anymore – you can get better.’ And it was like this revolutionary thing.

I never knew that people lived in recovery, that there is this huge movement of people supporting each other and helping each other to live a happy, healthy life. It was just really interesting to me that there was a choice and as I started hearing more I was ready to start doing more, because I didn’t want to live the life I was living but I also didn’t know how to move on.

There were too many obstacles in front of me to get over my addiction by myself, and too much wreckage behind me to try and heal it all myself. That’s where the experience I had at Butler of connecting with others made all the difference.

There was a meeting where someone came and spoke, this young man who shared his story. I had never heard someone be so candid, calm and cool while telling the story of the experience he’d had with addiction and what his life was like now, and it just blew me away because the kid’s story was like we were walking the same road together our whole lives but just never met.

After I was discharged from inpatient treatment I started at what was supposed to be a 45-day step down program at this rehab facility in Connecticut. But at the end of it, I didn’t have anywhere to go – no money, no help from family, no job. The director of the program knew I loved the outdoors, so he invited me to stay on and help out.

I lived on-site, ate from the cafeteria and had a small stipend for my work so I could save up to move into a sober house. They were building a log cabin up the side of this mountain for a new outdoor rehab program. Me and another guy spent three months building that cabin. That was my first job after getting to sobriety, and it couldn’t have been more perfect because it got me connected with things I hadn’t been connected with in a long time.

I got comfortable with myself again and sort of got to know myself again, which is the most important thing, I think. To be reintroduced to who you are and if you don’t like certain aspects of that, to now have the tools to be able to change that.

I went into sober living after that. At that point I was 24 and looking to get back to my career as a chef. I got a job at a French restaurant and started working again. I did that for 5 years and really loved it. Then I decided to go back to school and get licensed to become an alcohol and drug counselor.

I worked at a detox center for the next four years, and really tried to embody the spirit of care that was given to me. I was able to take care of myself and maintain my own recovery while also helping others to the best of my ability, and I really take a lot of pride in that.

I got married in 2015, and we bought a house. We had our son in 2016 and then two daughters after that. After our second child was born I decided to stay home with the kids and work toward a degree in biomechanical engineering, which combines mechanical engineering with environmentally friendly principles.

When I got sober everybody said, ‘You can do anything,’ and they were right.

But looking back, I wouldn’t change a thing because everything got me to where I am now. I have three beautiful kids, an amazing wife and a beautiful home and I would never have imagined any of that would be possible for me when I was struggling with addiction.

You know, recovery doesn’t look the same for everyone, just like no two pairs of jeans fit the same. It’s a highly personal journey, so I encourage people to find like-minded individuals that are successful in their journey and ask them how they did it.

For me, I think that was the most important part of my early recovery. It was the kindness of the staff at Butler and the access they provided to other people who have been in recovery for a while, so that you’re able to ask them questions.

I’m very lucky that I was able to experience what I did and meet the people that I did. Some people are not that fortunate. But everyone should be. Everyone deserves that chance.

Give Today to Change Someone’s Tomorrow

Your donation to our Intensive and Outpatient Addiction programs, no matter how small, will make a real impact on the lives of those who are choosing hope and fighting to heal. Will you be part of their story?

Who We Are
Research
Legal Notices
Auxiliary Aids & Services