Providence, RI, October 21, 2021 — State government officials, members of Rhode Island's faith-based community, leaders at Butler Hospital and The Miriam Hospital, and the Alzheimer's Association gathered at the State House today to raise awareness of the need for Rhode Islanders of all backgrounds to participate in a landmark Alzheimer's clinical trial.

Under the leadership of Pastor Howard Jenkins, president of the Rhode Island Ministers Alliance, the group called on members of Black, Indigenous, and People of Color (BIPOC) communities to get involved in the U.S. Study to Protect Brain Health Through Lifestyle Intervention to Reduce Risk (U.S. POINTER). It is critical that all populations, especially communities most affected by memory loss and dementia, are aware of and are invited to participate in scientific research so that findings are applicable to all Americans.

Today's event was aimed at changing that in Rhode Island and Southern New England, beginning by working with faith-based community leaders to increase BIPOC participation in U.S. POINTER. 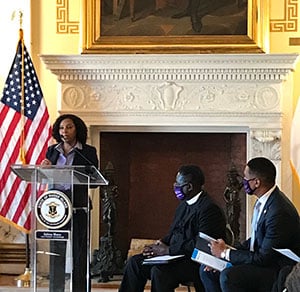 As a member of the Advisory Council on Alzheimer's Disease Research and Treatment, it is vital that we learn all we can about this debilitating disease,” stated Lieutenant Governor Sabina Matos.

“As an Afro-Latina, it is critical that we include people of color in research as our communities are often underserved and have been underrepresented in scientific research. I am proud to stand with Governor McKee, Pastor Jenkins, the Alzheimer's Association, and our health care partners at Butler and Miriam Hospitals to raise awareness about this critical study.”

As faith-based leaders, we recognize that we have a strong and influential voice with our community. Given the importance of Alzheimer's and its devastating impact on the BIPOC communities, we're leveraging our role to encourage widespread participation in this critical trial,” said Pastor Jenkins.

“We all have a role to play in addressing the health disparities plaguing our community, and I hope my fellow Rhode Islanders will reach out to learn more about this research study.”

A significant hurdle in our understanding of Alzheimer's, and in our ability to identify modifiable risk factors, means of prevention, and treatments that work for people of all ethnic and racial backgrounds is the recruitment and retention of traditionally underrepresented groups in clinical trials,” says Carl V. Hill, MPH, Ph.D., Alzheimer's Association chief diversity, equity and inclusion officer.

“The Alzheimer's Association is committed to addressing these challenges, and as the sponsor and a leader of this study this includes ensuring U.S. POINTER is reflective of the diversity of our nation and doing our part to reach out and invite members of African American and all underrepresented communities to participate.”

The current lack of diversity in Alzheimer's disease research and clinical trials represents a legacy of unfair treatment and mistrust, but also serves as a call for action to build inclusion and long-term relationships with underrepresented, diverse populations.

Faith-based organizations, state governments, local and national organizations that have long represented the best medical and public health interests of these communities, can play a vital role in overcoming these challenges. Trusted faith leaders including Pastor Jenkins and Dr. Lamonte Williams, conceptualizer of the Faith Engagement Model, are using their voice as the vehicle for this partnership.

Currently, BIPOC communities are underrepresented in U.S. POINTER. However, by utilizing the Faith Engagement Outreach Model, which engages the trusted voices in the Faith Community to forge new alliances and open new avenues for achieving our goals with our research institutions, we expect the program’s trajectory to trend upward in the next six months from its current 11% People of Color enrollment, conversely, aiming to our goal of 30%,” said Dr. Lamonte Williams.

The Faith Leaders are the gatekeepers to their communities and who grant access.

U.S. POINTER is a landmark two-year clinical trial designed to evaluate whether lifestyle interventions that target multiple risk reduction strategies can protect memory and other thinking abilities in people who may be at increased risk of developing memory loss and dementia in the future. The study is actively enrolling 2,000 diverse participants at five sites across the country. The Rhode Island study site is a collaboration between Butler Hospital's Memory and Aging Program and the Miriam Hospital, the Alzheimer's Association Rhode Island Chapter and the Alzheimer's Association Massachusetts/New Hampshire Chapter.

While it is known that healthy lifestyle changes can lead to a reduced risk of cancer, heart disease and other major diseases, U.S. POINTER will test whether these changes also protect against memory loss and dementia in older adults. There is currently no method or medication for preventing memory loss or dementia.

The study is currently working to enroll 400 volunteers from Rhode Island and surrounding areas who are 60 to 79 years old, who do not exercise regularly, and who may be at increased risk for memory problems in the future due to one or more factors such as slightly high blood pressure, slightly high cholesterol or blood sugar levels, or a family history of memory problems.

Participants will receive a physical exam, regular health monitoring and two memory check-ups per year, along with participation in local group sessions focused on exercise, nutrition and brain health.

Individuals interested in learning more about participating in U.S. POINTER can visit butler.org/pointer or call 401.POINTER (401.227.3669).

If you're 40+ with normal memory or mild memory loss, you can help in the fight against Alzheimer's. Here's how: butler.org/ALZregistry