Steven Blais is an avid runner and a fitness enthusiast. He’s also a big believer in the power of hope and the value of community. That’s what drew the Woonsocket, RI native to become founder of the Providence chapter of the November Project, a worldwide movement that brings people together for fitness and community through free group workouts.

Prior to the pandemic, he’d greet dozens of November Project members at dawn each day to run up and down Rhode Island’s State House steps together. These days they work out together virtually, but the benefits to both body and mind are still just as real. And for the last few years he’s also led group runs each Wednesday and at special events as a store ambassador for Lululemon, a worldwide athletic apparel company. 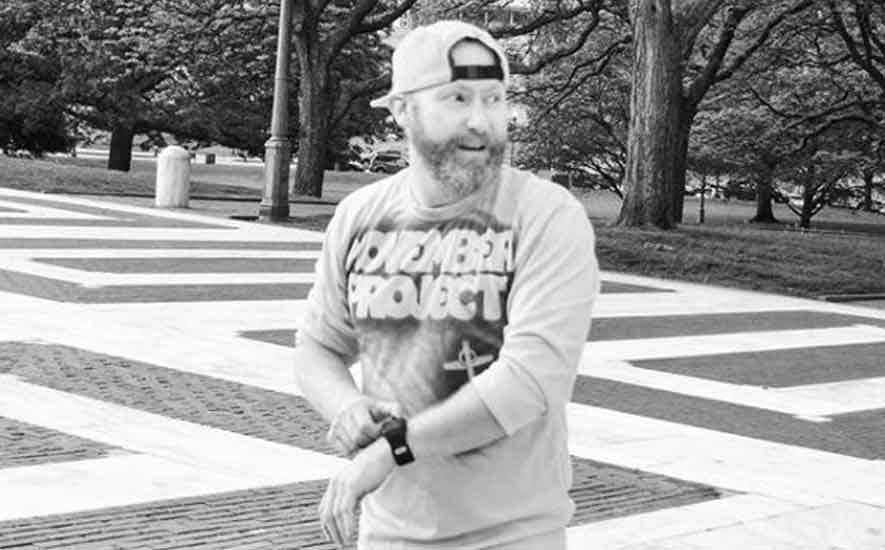 Steven wasn’t always fit, though. Hope wasn’t always easy to come by for him either, and community was a concept that existed more outside his window than in his heart. Instead, for near to a decade he lived his life under a constant shadow of dread that it would be cut short by early-onset Alzheimer’s.

“My mother, Betty, was diagnosed with early-onset Alzheimer’s in 2006,” he says. “Her own mother had died from Alzheimer’s, as well as some of her aunts and uncles. We lost her in May of 2017 and since then, two of her siblings have also passed from the disease.”

Steven’s family is afflicted with Dominantly Inherited Alzheimer’s Disease (DIAD), a rare form of inherited Alzheimer’s that strikes people in their thirties to fifties. Steven has a 50% chance of carrying the genetic mutation that could lead to him developing early-onset Alzheimer’s himself.

“When my mom was diagnosed, I just assumed I had it too. And from that point my life just sort of stagnated,” he says. “I couldn’t make major decisions. I was slow to engage in relationships or anything that really required a commitment. Eventually I decided to get the genetic testing done so I could finally know for sure one way or the other.”

As it turned out, in Steven’s case the testing couldn’t determine if he had all the genetic markers that would indicate if he was genetically predisposed to develop Alzheimer’s or not. He learned nothing new about his chances of living a long life.

But he gained all the perspective he needed to live the fulfilling life he deserved in the present.

“I left there knowing nothing, and it was the most beautiful, freeing moment I’ve ever had in my entire life. I realized that none of us knows what the future holds and in that way, my life is just like everyone else’s – so I should go live it and stop stagnating.”

Steven says from the moment his mindset changed, so did his life.

“Literally from that point, things like the November Project have happened and my relationship with Lululemon took place. A lot of my community service and community leadership has taken place because of that moment,” he says. “Not long after that I discovered running and fitness as a way to clear my mind and finally, I had hope. I also had so many ideas but no platform to share them from. And then these opportunities with The November Project and Lululemon came to me and grabbing on to them was like capitalizing on that hope.”

The fitness community isn’t the only place that Steven is capitalizing on hope. He’s also participating in research to help end Alzheimer’s, at the Memory and Aging Program at Butler Hospital. The program was founded and is directed by Stephen Salloway, MD, MS, a leading Alzheimer’s researcher who is also director of Neurology at Butler Hospital and a professor of Psychiatry and Human Behavior and Neurology at the Warren Alpert Medical School of Brown University.

“My mom was part of the DIAN study. She may have even been Dr. Salloway’s first enrolled participant in the study. I have many family members who were participants of the study before they passed as well, and many that are participants today, including myself. We’ve all decided that we want to do what we can to help get rid of this disease,” Steven says.

“I do basically anything that Dr. Salloway asks of me because I can’t thank him enough for everything that he and his team are doing on a daily basis. They’re just the most inspiring people I’ve ever met. Frankly Dr. Salloway has kind of become an extended family member. He and Diane [Monast, Memory and Aging Program nurse coordinator] were present at my mom’s wake and her funeral and for my aunt and uncle’s funerals as well. They don’t consider their patients to be data. The whole team at the program are very positive and accommodating and comforting; they’re absolutely some of the most loving people I’ve ever met.”

Steven says that in addition to the fitness community, he and his family have also found a valuable sense of community among the Memory and Aging Program staff as well as among others affected by Alzheimer’s disease and DIAD in particular. He says that those connections, along with the knowledge that he’s contributing to research that is critical in finding effective treatment for the disease, have been instrumental in helping him to navigate his own personal fears about the disease and to keep hope alive.

“Being part of a study can feel like a scary thing to do, but so is having Alzheimer’s,” he says. “For me, it’s a matter of do I want people on my side leading me through a situation like this and actively working to find a cure, or do I want to go through it alone? If you can add hope to any of it, that’s going to make the difference. It’s the catalyst to make the change and to guide you through when things get scary."

When it comes to the future of Alzheimer’s disease, Steven has plenty of hope.

“The fact that right now Alzheimer’s is the sixth leading cause of death in America and that in 10 years it’s expected to be the second-leading cause is terrifying,” he admits. “But I feel very hopeful that with the incredible research that’s happening now and the funding that we’re finally getting to accelerate that research, real progress is coming soon.”

“We’re at a point where hope and research are meeting together. We have a drug for Alzheimer’s treatment going into phase 3 trials [aducanumab] at the same time that we’re starting the U.S. POINTER study for prevention of the disease. And those two studies combined will hopefully show us the great gains that are to come in fighting this disease. I really think we’re at the precipice of finding the first person who is going to beat Alzheimer’s.”